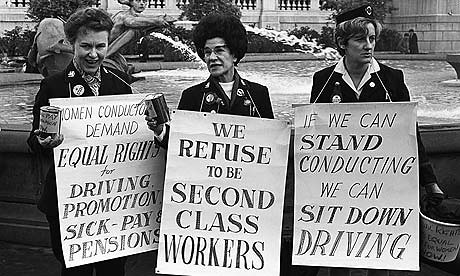 “In 1968, a walkout by a group of women machinists at Ford led to the Equal Pay Act. So why, four decades on, does a massive gender gap at all levels of earnings mean industrial tribunals are clogged up with cases?

Forty years ago, a group of women sewing machinists at the Ford Motor Company plant in Dagenham saw red. They discovered that men who were doing the same work as them - making the car seats for Cortinas and Zephyrs - were being paid 15 per cent more.

The women walked out of the plant on 7 June 1968 in support of a claim that would not only pay them the difference but that would recognise their skills and put them on a higher grade. Many of them were former dressmakers and took pride in their work which they felt was going unrecognised. They wanted to be put on the same pay level, grade C, as the paint spray operators in the plant. As this was the group of machinists responsible for making all the seat covers their action rapidly brought production at the plant to a halt.”