Britain's Holocaust shame: The voyage of the Exodus 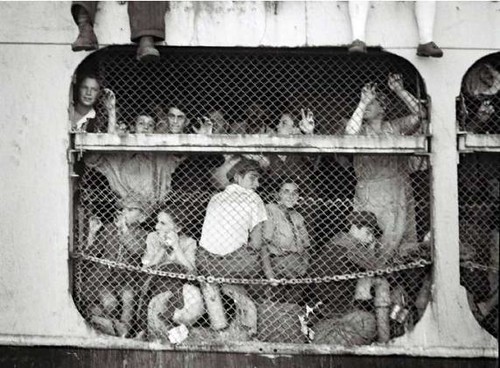 “The ship was filled with Jewish refugees, desperately seeking a new life in the Promised Land after the horrors of Nazi concentration camps. But, thanks to the Royal Navy, they were sent back to prison camps in Germany”
(…)
“British soldiers, ordered to storm the transport vessels to which the Jewish immigrants on board Exodus had been transferred, were accused of behaving like "Hitler Commandos", "gentleman fascists" and sadists.
As the British soldiers clashed with the Jewish refugees at the port of Hamburg, dockside banners read: "You are bringing us back to Germany, to a concentration camp worse than Belsen."
The episode proved hugely embarrassing for the British. But the international condemnation which accompanied the spectacle of Jews being marched off ships and put on trains for internment camps helped create the political climate for the creation of Israel the following year.”
(Link)
Esta página utiliza cookies. Consulte a nossa Política de cookies.