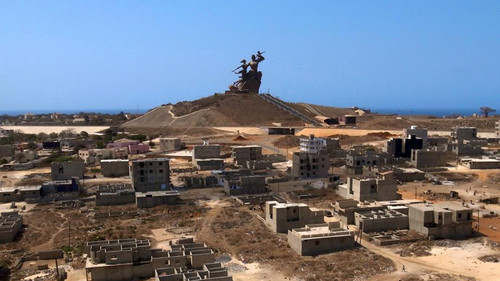 «The colossal monument’s Soviet-influenced, Socialist realism style makes sense when you consider that it was built by Mansudae Overseas Projects, a division of North Korea’s government-run propaganda art factory.

Founded in 1959, Mansudae Art Studio employs around 4,000 North Koreans at its Pyongyang headquarters, 1,000 of which are artists handpicked from rigorous national institutions like Pyongyang University. These artists spend their days producing beautifully detailed propaganda, such as portraits of rosy-cheeked farm maidens, paintings of North Korea’s glorious countryside, and One Can Always Lose, a series of 10 paintings depicting North Korea’s 1-0 win over Italy during round one of the 1966 World Cup. All public images of Kim Jong-un, Kim Jong-il, and Kim Il-sung, including the enormous statues in Pyongyang, are the work of Mansudae artists.»